The Different Modes of Life 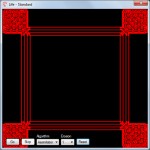 The Standard mode was my “first attempt” at simulating cellular automata. As a consequence it isn’t as well optimized as the other modes. It works in the same way as most other cellular automata simulations and doesn’t do anything very interesting.

This mode is still useful when you want to see what is “really happening” behind some of the other modes. 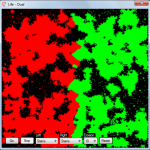 This was an experiment to see whether it was possible simulate two cellular automaton patterns on the same grid and to see how they would react to one another.

Most of the combinations of patterns don’t have interesting results – either one pattern destroys the other or they reach each other and remain deadlocked. However, there are some combinations that result in an interesting ‘symbiotic’ relationship where the two patterns are able to coexist (see things to try). 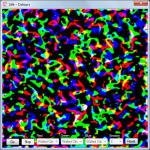 This was an attempt to make prettier patterns using Life. Instead of simply setting the grid cell on or off, the Colours mode instead adds its colour to the value of the cell.

This isn’t mathematically interesting, but it does produce much prettier patterns than the other modes. 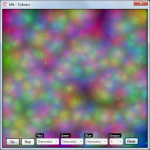 The original Colours mode will reset the cell’s colour values to zero when it reaches 255, which can be a little jarring.

Colours 2 will instead ‘reverse’ the direction of the cellular automaton so that it deducts from the colour value until it reaches zero again. This results in smoother patterns. 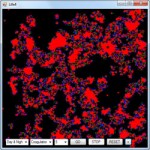 The Alternator mode makes things even more interesting by allowing two patterns to run alternately. This means that the first pattern will run on step 1, then the second pattern, then the first again, etc.

By allowing two patterns to run in tandem like this, even more complex behaviour can be observed. This feature appears to be unique to Life.

Alternator also attempts to make the display more interesting and informative by showing the cells that ‘died’ on the previous iteration in different colours.

One response to “Modes”